How Are Large Commercial Car Consignments Transported By Sea?

In a globalised economy where manufacturers and final users are tens of thousands of miles apart, getting cars moved from origin to destination usually involves using several transportation options. In the automotive industry, it’s common to use a combination of sea, train, and road transport to get products from the factory to dealership.

In this sector, sea transportation accounts for a large part of the process, so it’s useful to know the options available when it comes to shipping large consignments of vehicles overseas. In this article, we will look at the most common options: Roll on Roll Off (RoRo) ferries vs container ships (LoLo).

Roll On Roll Off

RoRo ferries are typically used to transport wheeled cargo over comparatively short distances – e.g. the UK to mainland Europe, Japan to South Korea, Australia to Java etc. The process of moving a car from A to B using RoRo involves the cars being physically driven onto the ship and secured in place. Once the RoRo vessel arrives at the destination port, the cars are driven off the ship and loaded onto trains or lorries for onward transportation to the final destination.

Cost efficiency is the key perceived advantage of RoRo car transport. Keeping costs as low as possible is critical in the current economic environment and given the ever-rising costs of sea transportation. Just as an example, in September 2021 car shipping costs were at a 13-year high. However, RoRo is only more affordable than containerised transport over short sea journeys, and with low volume car consignments. For longer journeys RoRo becomes problematic, as several changes may be necessary to accommodate the deep-water ports required by these heavy vessels.

The Risk Of Frequent Changes

These frequent changes each compound the risk involved with driving and manoeuvring a car around a busy ship and dockside area: from factory to lorry: from lorry to ship, from ship to lorry or train, and possibly into storage before making it to the final destination. A vehicle shipment from Germany to South Korea, for example, can easily involve six transfers and multiple transport methods, including ship, barge, and road transporter.

At any point the car could get scratched, dented, or damaged and – with the vehicles in plain sight at all times, the risk of theft and vandalism is ever present. This heightened risk is reflected in high insurance premiums for RoRo transport, especially when transporting high value vehicles.

Container shipping, or the Lift on Lift Off (LoLo) method, involves transporting cars around the world in container ships, safely stowed inside anonymous shipping containers. Vehicles are loaded onto a container – and often secured using special racks – and the containers are then crane-loaded into the ship.

The main advantage of container shipping is that cars only need to be put into position once, and they’re not handled again until the ship reaches the final destination. Minimal handling reduces the risk of accidental damage and theft. And lower risks can also lower operational costs, especially when it comes to insurance.

The shallow berth of container ships also gives these vessels a wider choice of ports and shipping lanes, potentially shortening the journey by several weeks.

Recently, container shipping is also considered a more sustainable option than RoRo for long distance journeys. The latest high-capacity container ships being built in China and Europe are driven by biofuel and have lower CO2 emissions than other commercial vessels.

Overall, container shipping is considered a safer and more environmentally friendly option for shipping large consignments of cars. The safety of this transportation method can be further increased by being very selective about the racking systems used to keep vehicles in place during transit. Get in touch with the Trans-Rak team today to find out the latest on secure car racking systems for containerised transport. 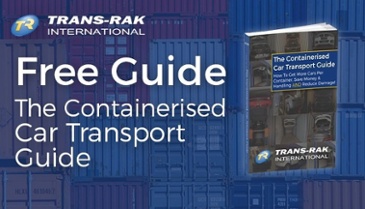