6 Of The Worst Examples Of Car Racking We've Ever Seen!

The cheapest way, at least in terms of upfront cost, is to gerrymander a temporary wooden racking system to either increase the automobile carrying capacity of the container, or to convert the shipping container for mixed goods transport. It is fair to say that some car racking systems are better than others. In this article we take a brief look at six of the worst examples we’ve seen, and explain why they are inadequate.

These pictures have been sourced from the Internet and are not intended as a negative reflection on the car manufacturers, clients, or even the transport companies themselves – we merely intend to point out the deficiencies of temporary car racking when compared to other systems. 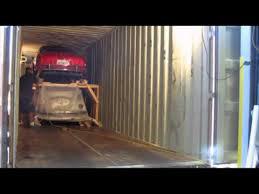 What is wrong? This wooden racking system looks like a fairly sturdy system for transporting small cars, but at a second glance its deficiencies become clear. To begin with, it is far from certain that the upper vehicle is securely bolted in place. Also, look at the remaining space in the container. It seems that the loading company will try and get at least another four cars in this container, which could lead to problems unless strong precautions are taken to secure each vehicle in place. Removing vehicles from such a rigid framework without integral ramps is also a challenge, increasing the risk of damage to the products. 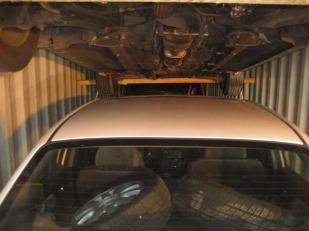 What is wrong? There are two major issues with this racking system that render it unsafe. Firstly, the minimal nature of the racking makes it possible that the upper car will be dislodged by vibrations during transport, causing severe damage to the vehicle below. The upper vehicle is literally held in place by two crossbeams at the front and the rear of the vehicle. Secondly, the lower vehicle has been stuffed with unsecured tyres and other objects. These could move around during transport, breaking windows and damaging other fittings. 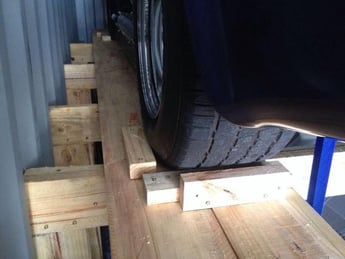 What is wrong? Credit where credit is due: this wooden framework car racking system looks sturdy. The issue is the wheel chocks used to secure the vehicle in place, which are inadequate to make the vehicle immobile. Shipping containers move around a lot while being transported by crane. If the brakes fail or the vehicle ties come loose, the car will simply roll over these chocks, risking damage to itself and other cars in the container. Worse still, vehicle movement could weaken the racking, causing it to collapse. 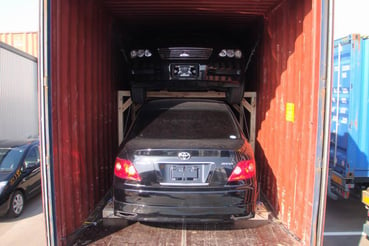 What is wrong? The upper vehicle in this container is balanced precariously. While it is unlikely to move while in transit, removing it from the container is going to be tricky. At the very least, there is the risk of splinter damage to the paintwork and undercarriage, as well as the potential of internal damage due to vibrations during the journey. This is also quite a large vehicle to be supported by what looks like lightweight wooden racking. Buckling or collapse is a real danger here. Furthermore, with a more efficient racking system, at least one other vehicle could have been fitted in at the front of this container, reducing the cost of transport.

Example Five: Uneconomical Use Of Space What is wrong? This user has set up a wooden racking system to create mixed storage space in a high shipping container. Fair enough. The problem here is inefficient use of space. The upper storage area has been filled with badly packed junk, tyres and other consumables; a use that hardly justifies the cost of the temporary racking. A far more effective solution would be to install a reusable steel racking system to increase the car carrying capacity of the container. A container this size could have carried three to four cars, rather than two? 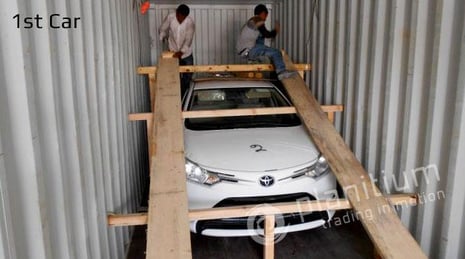 What is wrong? In this image, technicians are installing a wooden ramp to load an additional car on top of a vehicle already stowed in a shipping container. In principle this is a safer way of loading cars than winching them in, although in this case it opens up the possibility of the plywood planks not being strong enough to take the vehicle’s weight during loading. When maneuvering a vehicle into a shipping container it is very easy to misjudge positioning, which could damage the vehicle below.

The alternative to all the issues we have discussed in this article is to adopt reusable steel racking. A modular steel system, such as our R-Rak, can increase the carrying capacity of a standard shipping container to four cars or even more, while also ensuring complete safety during loading, during transit and during disembarkation.

To find out more about how to reduce risk during container shipping car transport, please click here to download our free Ultimate Guide To Container Car Transport.